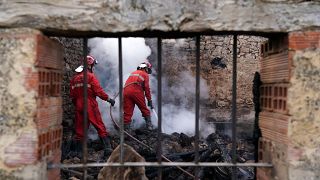 Firefighters battle the remnants of a wildfire in the Valle de Arlanza in Spain's northern province of Burgos.

In southern Greece, a major fire has broken out on Sunday, burning homes in villages not far from the archaeological site of Ancient Olympia.

Residents in Wennington, a village on the eastern outskirts of London, are recovering from the aftermath of a devastating fire which destroyed a row of houses.