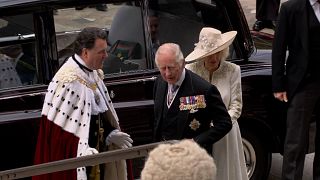 Members of Britain's royal family on Friday arrived at St. Paul's Cathedral in London for a service honoring Queen Elizabeth II’s 70 years on the throne.

Prince Harry and his wife, Meghan, made their first public appearance in the festivities marking the Platinum Jubilee.

The queen herself skipped the service due to difficulties getting around that have limited the 96-year-old monarch’s public engagements in recent months.

The congregation at St. Paul’s also included senior politicians, diplomats and more than 400 essential workers, charity volunteers and members of the armed forces who were invited in recognition of their service to the community.