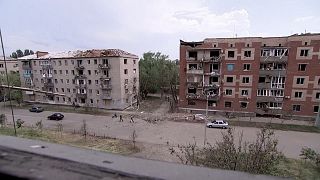 Smears of blood stain and shattered glass covered the staircase in a residential block which was an overnight missile strike on the city of Sloviansk.

Donetsk governor Pavlo Kyrylenko said in a Facebook post on Tuesday morning that a school and at least seven multi-story buildings were damaged.

According to the regional governor, at least three people were killed and six were wounded in the eastern Donetsk region.

Sloviansk was briefly taken over by Moscow-backed separatists in 2014.

Now it is once more in Moscow's sights as part of its effort to seize the entire Donetsk and neighbouring Luhansk region, which together make up the Donbas.