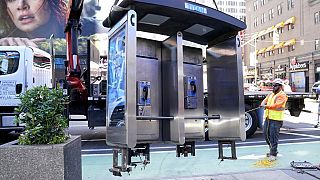 New York City marked another chapter in the slow death of the land line telephone.

The booths were once a fixture on seemingly every street corner in the days before cell phones.

The city began replacing its public payphones with wifi hotspots in 2015.

Other payphones around the city continue to exist in public transit stations and ferry terminals, as well as in some corner stores.

The city says the phone booth is destined for an exhibit at the Museum of the City of New York looking back on life before the digital age.