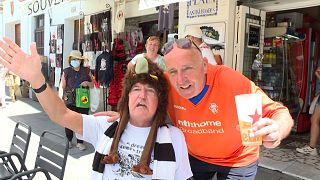 Ten years after sinking into financial oblivion, Rangers are on the verge of lifting their first European trophy for half a century when they meet Eintracht Frankfurt in the Europa League final on Wednesday.

Administration, liquidation and relegation hit a broken club in 2012, but while Rangers' recovery was complete when they won the Scottish Premiership last season, a final in Seville now offers them a chance of European glory.

Frankfurt will go into the game as favourites having already knocked out Real Betis, Barcelona and West Ham to enhance an otherwise disappointing campaign that saw the team finish 11th in the Bundesliga.