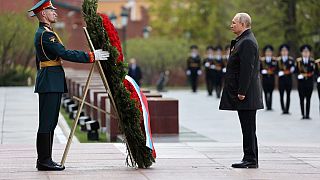 After the completion of the military parade on Moscow’s Red Square, President Vladimir Putin laid a wreath at the Tomb of the Unknown Soldier at the Kremlin Wall, paying tribute to those fallen during the Soviet Union’s 1941-1945 Great Patriotic War against Nazi Germany.

The Tomb of the Unknown Soldier is a national WWII military memorial of honor. The remains of the Unknown Soldier were transferred from a mass grave near Moscow and re-buried in a solemn ceremony in the Alexander Garden at the Kremlin Wall in 1966. The memorial integrating the Eternal Flame and an alley of hero cities as its key elements was opened there the next year.