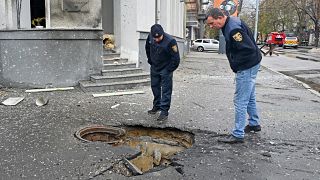 This Palm Sunday, those who remain in Kramatorsk go for walks which are interrupted by two explosions and the intermittent sound of an air raid siren, in this city in eastern Ukraine under the ever-present threat of a Russian offensive.

Devastation after a series of strikes in Ukraine's second-largest city of Kharkiv in the north east of the war-scarred country left at least five dead and 13 injured.