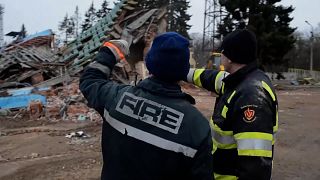 Rescuers continued to clear rubble from damaged houses in the Ukrainian city of Chernihiv on Thursday, after shelling and strikes left the city in ruins.

The mayor of the city, Vladyslav Atroshenko, said that 70% of Chernihiv had been destroyed. Russian troops withdrew from the besieged city at the beginning of April.