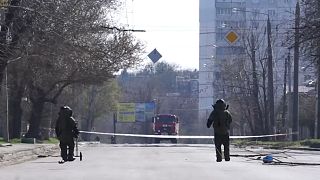 They said the mines were planted by Russian forces at 1 am on April 11 and they can be triggered to explode by a timer.

The head of the Kharkiv Regional State Administration, Oleg Synegubov, said on Telegram that the mines were small, weighed about 1.5 kg, and were found in streets and courtyards of residential buildings.

The Kharkiv branch of the State Emergency Service announced on April 11 that during the past 24 hours they carried out 54 operations to remove landmines and other explosive devices from the region.

The New York Times reported that Russian forces have begun to fire mines from artillery in the Kharkiv region. According to the paper, “Intentionally targeting civilians with weapons of any kind is prohibited under the Geneva Conventions, and Russia’s use of these scatterable mines would likely constitute an indiscriminate attack, given that the artillery rockets carrying these mines, which can travel up to 20 miles, were fired at a civilian area devoid of military targets.”