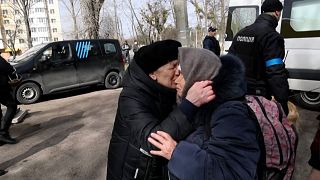 Emotional reunions as people who have fled Irpin arrive in Kyiv

Emotional reunions as people who have fled Irpin arrive in Kyiv

Deafened by shelling, the elderly woman steps down from an ambulance on the edge of Kyiv, to be smothered in tearful embraces from her son and daughter.

Deafened by shelling, the elderly woman steps down from an ambulance on the edge of Kyiv, to be smothered in tearful embraces from her son and daughter.

They had no idea whether 86-year-old Olga Molchanova would be among the final residents being evacuated from the devastated commuter town of Irpin.

But her husband Mykola, 81, is still in Irpin, declaring that "he'd rather die there, handicapped with crutches," her daughter Agnesa Brovkina said.

Olga left hours before Ukraine's interior minister said that Irpin had been "liberated" from Russian forces but that the town remained dangerous.

Most people have already fled the once quiet suburban town on the strategic northwestern entrance to Kyiv, leaving mainly the elderly and the sick to endure nearly a month of Russian bombardment.

After crossing a broken bridge across a river, the escapees are taken in ambulances to a dusty evacuation centre on the outskirts of Kyiv.

They have endured hellish conditions, but at least they survived.

The future for them remains uncertain, despite Ukraine's claims to be making gains in several areas as it pushes back Russia's stalled advance on the capital.

Ukraine's interior minister said late Monday that Irpin had been "liberated" -- echoing earlier comments by the town's mayor -- but it remained too dangerous to return to because "a sweep is going on completely through the streets" by security forces.

Fighting was still going on when the mayor made his announcement just before sunset.

"That’s incoming," one of a group of Ukrainian soldiers said as they leant against a Humvee after several nearby shell explosions.

"We’re still waiting" for confirmation that the town is fully under Ukrainian control, he said, adding that anyone going further did so at their own risk.