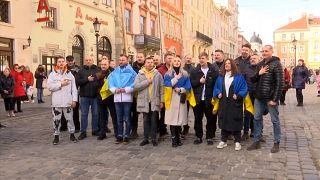 Opera singers gathered in the centre of Lviv in western Ukraine on Sunday to sing the country's national anthem.

They stood together on a street in the city centre where they sang the anthem in a demonstration of harmony that underlined the mood of national pride, as Ukraine seeks to resist Russia's invasion.

The brief but moving performance took place hours after Russian missiles pounded a military training base in the Lviv region, killing 35 people in an attack on a facility that has served as a crucial hub for cooperation between Ukraine and the NATO countries supporting it in its defence against Moscow's grinding assault