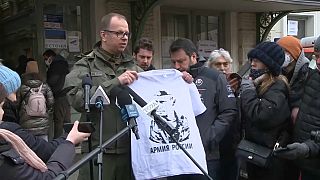 The mayor of a Polish town bordering Ukraine publicly called out the leader of Italy's right-wing League party for his pro-Kremlin views on Tuesday, derisively calling Matteo Salvini a "friend" of Russian President Vladimir Putin.

The mayor of a Polish town bordering Ukraine publicly called out the leader of Italy's right-wing League party for his pro-Kremlin views on Tuesday, derisively calling Matteo Salvini a "friend" of Russian President Vladimir Putin.

Przemysl Mayor Wojciech Bakun challenged Salvini during a news conference at the city's train station, where hundreds of thousands of refugees have arrived since Russia launched its war against Ukraine on February 24.

The mayor pulled a T-shirt from his jacket showing Putin's face and the words: "Army of Russia." The T-shirt was similar to one that Salvini had worn publicly in the past.

Bakun said he wanted to personally escort Salvini wearing the T-shirt to a refugee center "to see what your friend Putin has done."

Salvini interrupted Bakun as he spoke, saying: "We are helping refugees, children, moms, dads, from Ukraine." He then walked away.

Salvini has praised Putin in the past as "one of the best statesmen." He has denied taking money from the Kremlin.

Salvini was heckled by some people who called him a "buffoon."

The League leader said responding to questions "We are here to take to Italy children refugees, moms, not war, we don't want war" finally also condemning Putin and the Russian invasion.

The number of refugees fleeing Ukraine as the Russian army shells its cities reached two million on Tuesday, with more than half arriving in Poland.