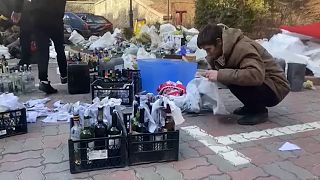 Ukrainians started preparing Molotov cocktails in Kyiv amid fears of possible Russian intrusion into the city.

Huge explosions lit up the sky early Sunday near the capital, Kyiv, where terrified residents hunkered down in homes, underground garages and subway stations in anticipation of a full-scale Russian assault.

Officials maintained a 39-hour curfew to keep people off the capital's streets until Monday morning, complicating the task of assessing the intensity of the fighting.