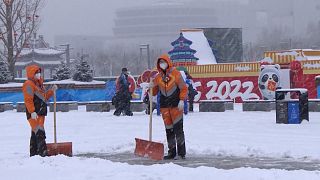 The city of Beijing awoke to a fresh snowfall on Sunday morning.

The city of Beijing awoke to a fresh snowfall on Sunday morning.

It was the first time snow has fallen on the capital since the Winter Olympics opened on February 4th.

Snow fell on Saturday in the mountain zones for the first time, easing concerns from the IOC and organisers that the games would take place without any real snow.

But heavy snow has disrupted some event schedules at the Games, including women's freeski slopestyle qualification.