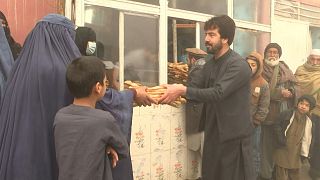 The bread distribution launched on Saturday is part of the "Save Afghans from Hunger" campaign organised by a university professor in Kabul.

At least 75 families in seven districts of the snow-covered capital will receive daily rations of naan bread for a month.

Afghanistan is in the grip of a humanitarian catastrophe, compounded by the Taliban takeover in August, when Western countries froze international aid and access to assets held abroad.

Jobs have dried up and many civil servants have not been paid for months in the country, which was almost entirely dependent on foreign donations under the previous US-backed government.

The UN has warned that half the country is at risk of food shortages.