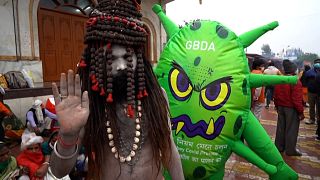 Hundreds of thousands of Indian pilgrims began flooding an island in the Ganges on Thursday for a massive religious festival as cases of Covid-19 spread across the country.

Authorities said they expected up to three million people, including ascetics smeared with ash and sporting dreadlocks, to take a ritual bath in the holy river on Friday, the highlight of the annual Gangasagar Mela.

A similarly colossal religious festival, the Kumbh Mela, which the Hindu nationalist government refused to ban last April, has been blamed in part for a devastating spike in cases that have killed 200,000 people, according to official counts, though some experts fear the real toll is several times higher.