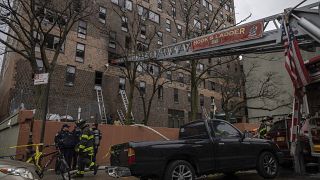 At least 19 people, including nine children, were killed after fire tore through a Bronx apartment building in what's become New York City's deadliest blaze in more than three decades.

Stefan Ringel, a senior adviser to Mayor Eric Adams, confirmed the death toll. He said the children killed were 16 years old or younger.

Most of the victims had severe smoke inhalation, fire Commissioner Daniel Nigro said.

Firefighters “found victims on every floor and were taking them out in cardiac and respiratory arrest,” Nigro said. “That is unprecedented in our city.”

Approximately 200 firefighters responded to the building on East 181st Street around 11 a.m. Sunday 9. The fire originated in a duplex apartment spanning the second and third floors, Nigro said. Firefighters found the door to the apartment open, he said, which apparently allowed the fire to quickly accelerate and spread smoke upward.