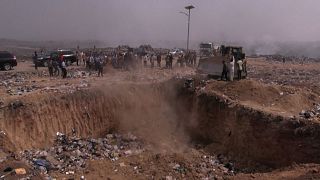 Authorities in Nigeria destroyed more than one million expired doses of AstraZeneca COVID-19 vaccine, Wednesday, even as the West African country’s vaccination rate has almost doubled in the last one week amid a spike in confirmed infections.

The expired doses - numbering 1,066,214 - were destroyed at a landfill in Nigeria’s capital, Abuja, a week after the nation said it will no longer accept donated COVID-19 vaccines with short shelf lives.

National Food and Drug Administration Director Professor Mojisola Adeyeye said they "are one of the few agencies in Africa that tests our vaccine before use" and that they had informed donors of this fact.

Vaccination is also rapidly picking up in the most populous country in Africa, which has set an ambitious goal of fully vaccinating 55 million of its 206 million citizens before February 2022, although only 2% have received their two doses so far.

The West African country has been seeing a spike in confirmed infections since it detected the highly-infectious omicron variant in late November, recording a 500% increase in the number of cases in the past two weeks, according to the Nigeria Centre for Disease Control.

The 2,123 new COVID-19 infections Nigeria confirmed on Tuesday was the highest daily tally since January this year and the second highest since the pandemic.