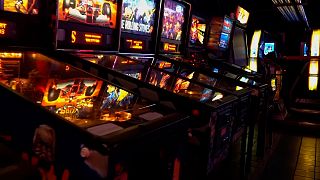 It's one of the most unusual museums in Moscow, the Russian capital's pinball museum is based on the private collection of owner Alexander Kazmin.

He's been collecting the retro arcade machines from all over Russia since 2015. "First, I had a dream to play a real machine since childhood," he says.

"When I grew up and became an adult and began to earn, I had an idea to buy one machine. But world experience shows that such stories don't finish with just one machine, if you like the pinball, then it's impossible to stop."

But when the number of machines in his collection reached 20, he decided to open a small private museum.

The museum has been open since 2018, and now counts over forty flashing machines in its retro collection.

The collection also includes more than fifty exhibits related to the invention and development of slot machines from the end of the 19th century to the 2000s. The first pinball game was patented by inventor Montegue Redgrave in 1871.

A wide variety of machines from different times, shown at the museum, tell the history of arcades before the advent of modern computers and game consoles.

According to Kazmin, the mission of the museum is to preserve pinball machines and other arcades as cultural objects from the past.