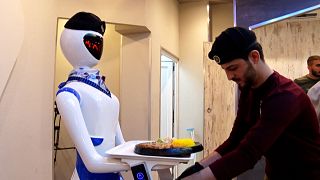 Robot waiters take Iraqis in Mosul into the future

From the rubble of the war-torn Iraqi city of Mosul, androids emerge here and there in a restaurant to serve their amused customers.

These futuristic waiters are the result of technology developed in the northern city, a former stronghold of the jihadist group Islamic State.

A team from the University of Mosul's mechatronics department,integrating several fields of engineering as well as robotics, did the programming and connected a network and a server to the restaurant.

An astronaut floating on the wall sets the scene, and views of Earth and other planets seen from space give customers the impression of looking through the windows of a spaceship.

But the star attractions remain the two androids, wearing scarves and black berets, who shuttle through the restaurant on rails to deliver orders.

As they approach, smartphones come out and children line up next to them to take a souvenir photo.