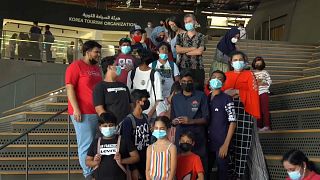 South Korea's pavilion at Dubai's Expo 2020 is hosting the traditional children's games popularized by the Netflix most viewed series "Squid Game" – but without the deadly consequences.

Participants each day get the chance to play "Dalgona," a game where they try to cut out different shapes from a hard candy. Winners – and even the losers – get a South Korean snack as a reward.

Participants also play "Ddakji," in which they try to flip an envelope-shaped paper. But they as well don't get slapped if they lose like the series.

"Squid Game" is a brutal Netflix survival drama about desperate adults competing in deadly children's games for a chance to escape severe debt.

The show has captivated global audiences since its September becoming Netflix's most-viewed series.

The pavilion's games started on Oct. 14 and will be held until Nov. 15.