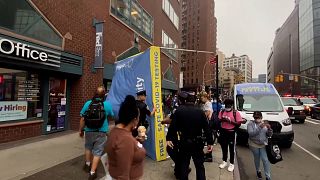 Some people opposed to the vaccination mandate demonstrated Monday. Videos posted on social media show protesters marching in various locations around the city.

Mayor Bill de Blasio had warned that unvaccinated school employees would be placed on unpaid leave and not allowed to work this week. The city plans to bring in replacements if needed.

The smooth implementation of the mandate will be a test for de Blasio, a Democrat who has boasted about the city's ability to keep school buildings open for most of the past school year, while other districts have switched to distance learning. New York City is not offering a distance option this year.