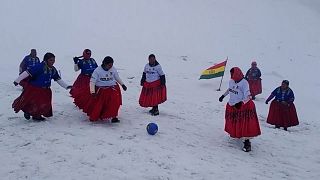 The Cholitas Climbers - a group of Bolivian Aymara women dedicated to climbing mountains - played a football match at 5,890 meters altitude on the Huayna Potosi mountain near La Paz.

The Cholitas Climbers - a group of Bolivian Aymara women dedicated to climbing mountains - played a football match at 5,890 meters altitude on the Huayna Potosi mountain near La Paz.

Dressed in traditional skirts and blankets as well as their climbing gear, the nine Cholitas climbed one of the most attractive snow-capped peaks in La Paz and played for 20 minutes amid heavy snowfall.

Climbing poles served as improvised goalposts in the snow.

Before the ascent, the women made an offering to the Pachamama - or Mother Earth of Indigenous tradition - to ask for good omens on their performance.

The Cholitas Climbers were formed in 2015, and to date they have climbed a series of Bolivia's highest peaks.

In 2019, the group also crowned the tallest summit in South America, Aconcagua in Chile.