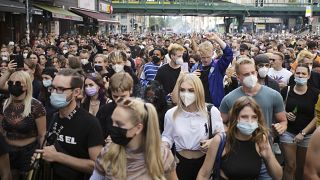 Despite an official ban on protests, demonstrators marched through Berlin city center in various groups against the current measures being imposed by the German government. A number of protesters were arrested by police because they had called for people to assemble.

The protest started at the North end of the inner city, where another demonstration had originally been registered. According to estimates, around 2,000 people marched through Berlin. Many of the participants were on bicycles.

2,200 police force members were deployed to secure the protest. According to police, the original planned protest had been called off at short notice and a different coronavirus protest took place instead.