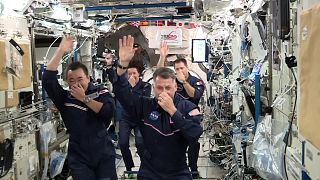 The International Space Station Expedition 65 crew recorded themselves having a day of ‘weightless fun’ at the end of a long week of work. From Earth orbit, 400 km above our planet, the crew present the very first “Space Olympics”.

ESA astronaut Thomas Pesquet shared this video on social media with the caption: “The first-ever Space Olympics! A Saturday afternoon on the International Space Station.