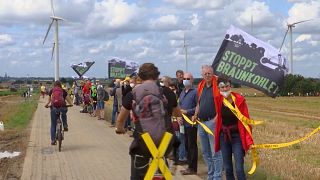 Activists form human chain around Garzweiler mine in Germany

About 2,500 people in western Germany demonstrated on Saturday 7 August for a quick halt to coal mining in the region, where a village could be bulldozed to make way for a mine's continued operation.

Participants in the protest formed a 4-kilometer human chain between the threatened village of Lutzerath and nearby Keyenberg.

Lutzerath stands a few hundred meters away from a vast pit where German utility giant RWE is extracting lignite coal to burn in nearby power plants.

Coal mining is due to end in Germany by 2038, but environmentalists say it needs to stop at least 10 years earlier if the country is to play its part in meeting the Paris climate accord goal of limiting global warming to 1.5 degrees Celsius.

The village of Lutzerath is located in North Rhine-Westphalia state, which was among the regions of Germany hit hardest by floods last months that killed more than 200 people and caused billions of euros worth of damage.

Scientists have said that while it’s hard to attribute specific storms to climate change, extreme weather of the kind that caused the flash floods in parts of Western Europe last month will become more severe and frequent in a warming world.