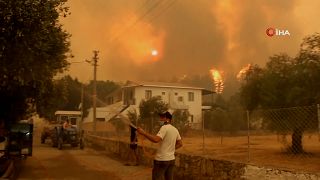 Residents of Mugla and surrounding areas fled their villages Sunday as wildfires continued to rage for a fifth day and the discovery of more bodies caused the death toll to rise to eight.

Together with tourists, Cokertme residents fled the danger by boats and cars as the flames got closer and closer to the coastal town.

In one video, fire engines and cars were rushing to escape fire raging on all sides.

After nightfall, the village looked apocalyptic from a distance, with flames taking over the dark hills.

Bodrum mayor Ahmet Aras said Sunday evening that people experienced "hell" near Cokertme and Mazi as they drove away from the fire.

He said the blaze could not be stopped and hoped to protect residential areas but said it was too late for the trees.