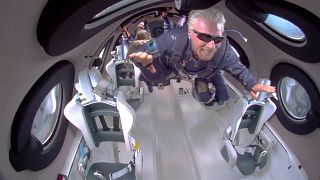 British billionaire Richard Branson has reached space aboard his own winged rocket ship in his boldest adventure yet.

Branson and his crewmates popped champagne in celebration of the feat, which vaults the nearly 71-year-old Branson past fellow billionaire and rival Jeff Bezos, who is planning to fly to space in a craft of his own nine days from now.

The crew from Branson's Virgin Galactic space tourism company reached an altitude of about 53 miles (88 kilometres) over the New Mexico desert — enough to experience three to four minutes of weightlessness and see the curvature of the Earth — and then safely glided back home to a runway landing.

"The whole thing, it was just magical," a jubilant Branson said after the trip home aboard the sleek, white space plane, named Unity.

The brief, up-and-down flight — the rocket ship's portion took only about 15 minutes, or about as long as Alan Shepard's first U.S. spaceflight in 1961 — was intended as a confidence-boosting plug for Virgin Galactic, which plans to start taking paying customers on joyrides next year.