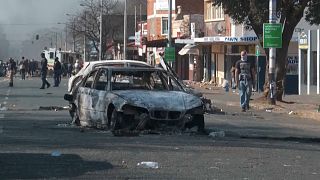 South Africa: violence and looting in KwaZulu-Natal and Johannesburg

Dozens of people have been arrested after violence and looting erupted in South Africa. Unrest centred on KwaZulu-Natal, where ex-president Jacob Zuma is in jail, and in the economic capital Johannesburg.

In a statement, police said they had arrested 37 people in the eastern province of KwaZulu-Natal and 25 in Johannesburg over the previous two days.

While the protests appear to have been triggered by Zuma's 15-month sentence for contempt of court, they have been amplified by a sense of economic desperation as the country faces tightened restrictions amid a third wave of the Covid-19 pandemic.