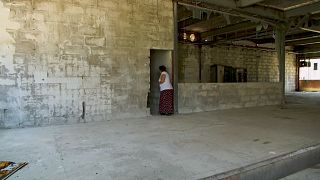 Through tears and in between fraught silences, Devla Ajsic refuses to remain quiet any longer, as she walks around the eery former Dutch U.N. compound where she was sexually abused over 20 years ago.

Ajsic was 21-years-old and three months pregnant in July 1995 when she was repeatedly sexually assaulted in Srebrenica while her fiancé and thousands of other mostly Muslim men and boys were taken away and executed in Europe's only acknowledged genocide since World War II.

For decades, Ajsic did not talk openly about the horrors she endured after Bosnian Serb forces stormed the eastern Bosnian town in July 1995, in the waning months of the Balkan country's 1992-95 war.