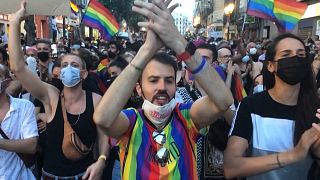 Protesters demanded justice for Samuel Luiz Muñiz, 24, who died on Saturday in Coruña after being brutally beaten.

According to the Government Delegation, some 3,000 protesters carried banners bearing slogans such as "against Nazis, marikonazos" and "homophobia and fascism are the same".