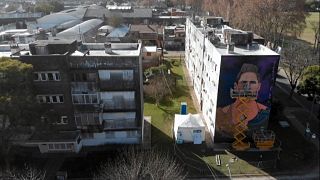 "From another galaxy... and from my neighbourhood," declares a freshly painted mural of Lionel Messi in the Argentinian town where he was born 34 years ago.

The mural covers one end of a four-story apartment building in the La Bajada neighbourhood of Rosario where the star lived as a child and faces the primary school he attended.

The 14-meter-high, 8-meter-wide artwork unveiled on Thursday depicts a bearded, shirtless Messi, and the smaller figure of the player as a child juggling a ball.

The adult Messi has a pair of boots, laces tied together, hanging around his neck. One boot is black and the other gold, depicting the record six Golden Shoes Messi has won as top scorer in Europe.