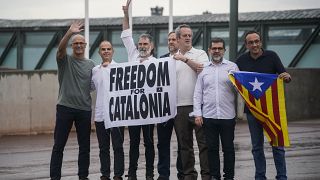 Nine Catalan separatists pardoned by the Spanish government walked out of prison on Wednesday to the cheers of supporters, leaving behind their lengthy terms for organizing a bid four years ago to make Catalonia an independent republic.

Spain’s Cabinet pardoned them Tuesday in the hope of starting what Prime Minister Pedro Sanchez called a much-needed reconciliation in the country’s restive northeastern region, although fervent local support for the pardoned separatists indicated the problem won't go away anytime soon.

Junqueras and former foreign minister Raul Romeva could be seen walking through a scrum of reporters and supporters after being released.

The order canceled the remainder of prison terms ranging from nine to 13 years over sedition and misuse of public funds linked to the 2017 banned referendum and a short-lived independence declaration.

But the separatists won't be able to hold public office until the end of their sentences and they could go back to prison if they go against Spanish law again, the decree said.

Despite polls showing that much of Spain's public is against the pardons, Sánchez has defended them, arguing that they are popular in Catalonia and that freeing the separatists will be a fresh start for relations between central and regional authorities.