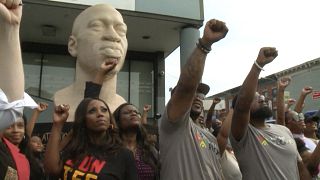 A six-foot statue of George Floyd, the Black man killed by a white policeman in Minneapolis in May 2020, is unveiled in Brooklyn as part of Juneteenth celebrations in New York.

The 800-pound bust, created by American sculptor Chris Carnabuci from Confront ART, will be displayed at Flatbush Junction for several weeks before moving to Union Square.

People dance to go-go music on Black Lives Matter Plaza in Washington, DC to commemorate Juneteenth, which marks the end of slavery in the United States and became a federal holiday this year, after US President Joe Biden signed it into law.