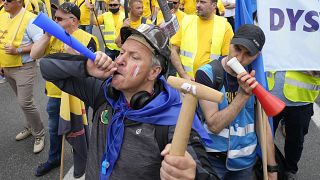 Activists from energy, mining and fuel sectors from across Poland rallied for a protest march through Warsaw on Wednesday. Participants are reportedly protesting against alleged violation of employee rights, demanding at the same time, details about the restructuring of the mining sector.

The protesters say there is a total lack of social dialogue and that they face the threat of job losses. The country's "sovereignty" and "energy security" is in danger - they add.

The march was headed towards the government's seat where a petition to Prime Minister Mateusz Morawiecki is to be handed over with the request to clarify how the mining sector will be transformed in Poland.

The protesters criticized the European Union and the recent decision of the EU Court of Justice that ordered an immediate halt to the mining of lignite in the Turow mine, close to the border with the Czech Republic.