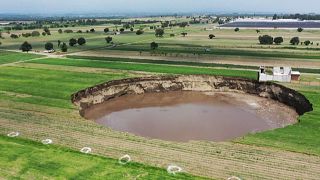 A sinkhole that has been growing by dozens of metres every day has had residents of a rural area in the central Mexican state of Puebla worried since last weekend.

In Santa María Zacatepec, some 119 kilometres from Mexico City, the Sánchez family was startled on Saturday afternoon by a loud bang, which they initially thought was a lightning strike.

However, shortly afterwards, the Sanchezes discovered that a few metres from their house, in the middle of a field, the earth had collapsed.

The sinkhole is filled with water, surrounded by green fields and cordoned off by the authorities.