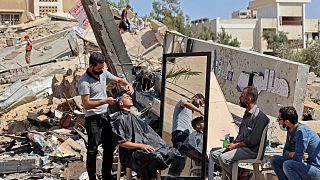 Palestinian barber Hashem al-Jarousha is determined to keep practising his profession and hobby amid the ruins of his shop in Gaza City which was destroyed by Israeli strikes.

A ceasefire was reached late last week after 11 days of deadly violence between Israel and the Hamas movement which runs Gaza, stopping Israel's devastating bombardment on the overcrowded Palestinian coastal enclave which, according to the Gaza health ministry, killed 248 Palestinians, including 66 children, and wounded more than 1,900 people.

Meanwhile, rockets from Gaza claimed 12 lives in Israel, including one child and an Israeli soldier.