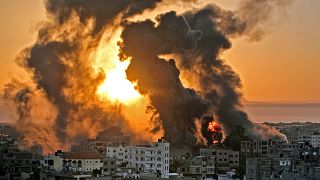 Israeli airstrikes in the Gaza Strip have hit the homes of high-ranking members of the Hamas militant group with the territory's police headquarters also targeted.

Rockets are launched towards Israel from Rafah, in the southern Gaza Strip during the night. Hamas said it had fired more than 200 rockets into Israel in retaliation for strikes on a tower block in Gaza.