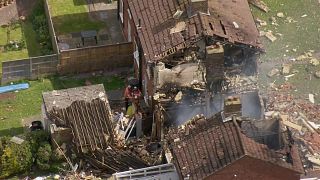 Seven people were injured, two of them seriously, after an explosion ravaged a house in Kent.

Seven people were injured, two of them seriously, after an explosion ravaged a house in Kent.

Firefighters were at the scene of the morning explosion in Willesborough, Ashford, and aerials showed fire engines dousing the smouldering property which sustained extensive damage, with water jets.

According to the South East Coast Ambulance Service, two people were taken to hospital in London with serious injuries, and five others who were believed to have sustained less severe injuries were taken to William Harvey Hospital in Ashford.

The explosion was followed by a fire and some of the victims had to be freed from the house by emergency services.

Local residents were being told to keep their windows shut and members of the public advised to stay away from the area and an evacuation zone has been set up.

There was no immediate information as to the cause of the blast.