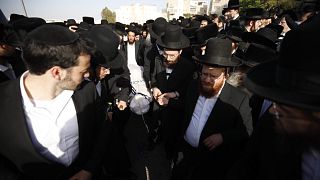 Ultra-Orthodox Jews hold funeral for pilgrim who died in Israel

Among them was a memorial for Rabbi Eliezer Mordechai Goldberg, as burials do not take place during the Jewish Sabbath.

The festival was attended by tens of thousands of ultra-Orthodox Jews in northern Israel and killed at least 45 people and injured about 150 early Friday, medical officials said.

It was one of the country's deadliest civilian disasters.

The stampede began when large numbers of people thronged a narrow tunnel-like passage during the event, according to witnesses and video footage.

People began falling on top of each other near the end of the walkway, as they descended slippery metal stairs, witnesses said.

Video footage showed large numbers of people, most of them black-clad ultra-Orthodox men, squeezed in the tunnel.

The stampede occurred during the celebrations of Lag BaOmer at Mount Meron, the first mass religious gathering to be held legally since Israel lifted nearly all restrictions related to the coronavirus pandemic.

The country has seen cases plummet since launching one of the world's most successful vaccination campaigns late last year.

Lag BaOmer draws tens of thousands of people, most of them ultra-Orthodox Jews, each year to honor Rabbi Shimon Bar Yochai, a 2nd century sage and mystic who is believed to be buried there.

Large crowds traditionally light bonfires, pray and dance as part of the celebrations.