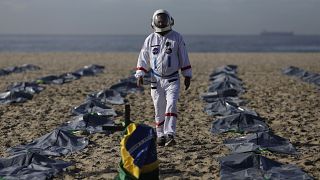 Volunteers placed 400 body bags on the beach during the demonstration in memory of Brazilians who have died from the virus during the pandemic.

Those participating in the act, dressed in hazmat suits as they buried empty body bags covered with Brazilian flags.

A banner was also set in front of the demonstration with the message that read in Portuguese "400-thousand deaths. Who's responsible and who are the accomplices?"

Antonio Carlos Costa, President of Rio de Paz, said the protest was being held to show that there are people responsible for these 400-thousand deaths.

"Mainly responsible is the federal government and the accomplices are those who support the president (Jair Bolsonaro) uncritically," said Costa.

Some bystanders showed support but others jogged past the protest, shouting in favour of President Bolsanaro.

On Thursday Brazil became the second country to officially top 400,000 COVID-19 deaths, losing another 100,000 lives in just one month, as some health experts warn there may be gruesome days ahead when the Southern Hemisphere enters winter.

The United States was the first to meet the milestone.

April was Brazil's deadliest month of the pandemic, with thousands of people losing their lives daily at crowded hospitals.