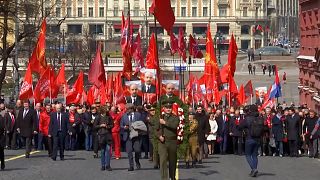 Russia's Communist Party paid homage at the mausoleum of Soviet leader Vladimir Lenin in Moscow's Red Square on Thursday to mark what would have been his 151st birthday.

Several hundred people participated in the procession, carrying flowers and portraits to the place that holds Lenin's embalmed body.

Party members told the Associated Press of their devotion to the late Bolshevik leader and how they believed there was much to be learned from the Soviet era.