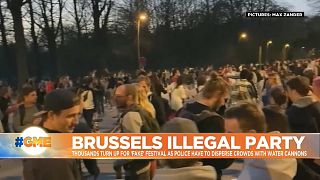 Riot police were deployed to clear a park in Brussels after thousands of unaware revellers turned up for a fake festival on April 1st.

The advert also details the absence of any social distancing. Quite the opposite in fact:

"No distancing or barriers will be tolerated. Come naked, kiss each other, make lots of love... let's bring back humanity into our lives, and dance till dawn!" the advert read.

In the build-up to the festival, authorities issued statements making it clear that the festival was in fact an April Fool’s joke, including the police who put out a tweet on March 17.

Despite these warnings, thousands of people turned up to party in the Bois de la Cambre park on Thursday, forcing an intervention by riot police, who used water cannon and tear gas to clear the crowds.

One killed and ten injured in rare Netherlands tornado