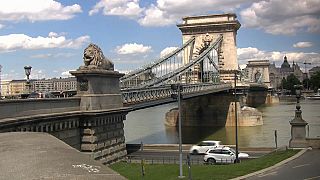 After years of delay, renovation works for the iconic Chain Bridge in Budapest gets underway

One of the most famous attractions in Hungary, the Chain Bridge, is finally being renovated after falling into disrepair.

"The pavements and the roadways will be demolished and rebuilt completely. Rustproofing will be needed for the steel plates," according to Dávid Borsi, spokesperson, Centre for Budapest Transport.

The renovation is long overdue. The last one took place more than three decades ago and rust has taken its toll. After many arguments between the government and the opposition-led city, the project is finally underway.

Kata Tüttő, deputy to the Major of Budapest, says the renovation is estimated at 19 billion forints (€51 million). "5 billion forints will go to monument protection, heritage protection. Limestone will come from a special mine which was already considered depleted, candelabras will be renovated with special, state-of-the-art tools."

The Chain Bridge has been the symbol of Budapest for more than 170 years. Tourists and newlyweds often take pictures with it in the background from Adam Clark square. It's hoped the renovations will be concluded by 2023.