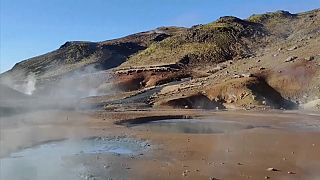 Iceland on high alert for volcanic eruption after thousands of tremors

Iceland is on high alert for a possible volcano eruption on the south-western peninsula near the capital Reykjavik.

More than 20,000 earthquakes have occurred in recent weeks in an area that hasn't seen volcanic activity for the past 800 years.

Pall Einarsson, Professor Emeritus of Geophysics at the University of Iceland, says big earthquake sequences are not unheard of. "But this is the first time we see it here in the neighbourhood of the capital of Iceland, Reykjavik and it's a new experience for a lot of people now, to feel earthquakes every day."

Plans are afoot to make sure heavy machinery can be drafted in to make ditches and earth walls to change the course of any molten lava, should an eruption occur. Similar precautions were made in 1973 to save the main town on nearby Heimaey island.

So far the tremors have not caused significant damage, at the moment the activity is more of a nuisance.

Sigurdur Oli Thorleifsson, leader of Grindavik council, has returned back home after leaving the area to get some much-needed sleep. “We were outside, unloading the car. The earth shook outside and when I came in with the luggage, the kitchen island was on its side. And various things had come out of cupboards."

Natural hazard specialists are currently on duty 24-hours a day in case of volcanic activity.

If there is an eruption it is expected to be mainly lava, unlike the 2010 eruption of Iceland's Eyjafjallajokull volcano, whose massive plumes of ash disrupted air traffic for weeks in Europe and left millions of travellers stranded.