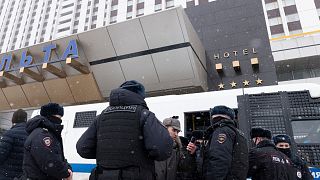 Russian police arrested around 200 opposition politicians and municipal deputies at a Moscow conference as authorities tighten the screws on Kremlin critics ahead of parliamentary elections.

The mass arrest of municipal deputies was unprecedented.

Police showed up at the gathering in Moscow shortly after it opened, saying that all those present will be detained for taking part in an event organised by an “undesirable” organisation.

A police officer leading the raid said the detainees will be taken down to police precincts and charged with administrative violations.