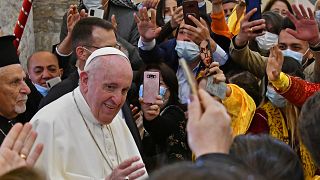 Pope Francis on Sunday arrived at a church in Qaraqosh, Iraq on the final day of the first ever papal visit to Iraq.

He travelled to the Church of the Immaculate Conception, which was once damaged by Islamic State during militants.

He was expected to hear testimonies from residents and pray in the church, which was believed to have been torched by IS and has been restored in recent years.

Only a fraction of families have returned to the town after fleeing Islamic State rule in 2014.