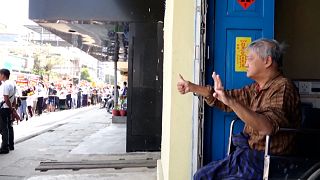 Thousands marched in the streets of Myanmar’s capital Naypyidaw, attempting to avoid clashes as security forces were deployed.

The military junta warned it was prepared to use lethal force against rallies inciting "riot and anarchy".

Three demonstrators were killed over the weekend and there was a funeral on Sunday for a woman who died from bullet wounds at an earlier rally.

Authorities have detained 640 people since the coup, according to the monitoring group Assistance Association for Political Prisoners.