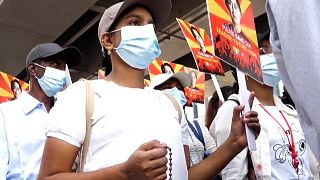 Demonstrators returned to the streets of Myanmar on Sunday, a day after two protesters were shot dead when police used live ammunition to disperse crowds demonstrating against the country's military coup.

An impromptu memorial honouring those who had been killed in the movement has been set up under an elevated roadway in Yangon, Myanmar's largest city.

Protests have been taking place across the country for several weeks, since the military's takeover on February 1, which saw civilian leader Aung San Suu Kyi ousted.