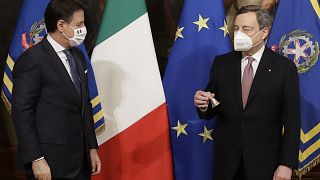 At Palazzo Chigi, he received a small bell from outgoing premier Giuseppe Conte in a traditional ceremony of the exchanging of the bell to mark the handover of power.

The bell is used to mark the beginning of cabinet meetings.

After the ceremony, Conte was warmly applauded as he left Palazzo Chigi, the Italian government headquarters.

Draghi's new government balances economic experts and other technocrats with career politicians from across the spectrum to guide the country towards recovery from the coronavirus pandemic.

The 73-year-old, who also previously led Italy’s central bank, replaces Conte, who resigned after a small party yanked support over the handling of the pandemic.

Draghi was tapped after Conte failed to cobble together enough support for a third coalition government.